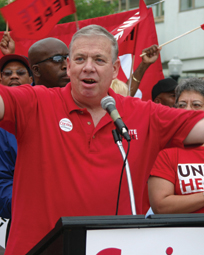 In the spring of 2000, I was finishing a PhD at Yale University where I also served as a volunteer organizer for GESO, the union of graduate students and researchers at Yale. I had recently, after enduring the gruelling and degrading academic job market, been offered a prestigious job in the English Department at the University of Chicago. But having experienced the power of union organizing with HERE, and having told my peers for years that building a movement of academics and other working people was the most important challenge of our generation, I was leaning toward taking a much less prestigious (and much lower-paid) job with the union. I was far from certain, though, about the long-term wisdom of such a decision.

At the height of my indecision, I ran into a young man I knew–not very well–from the basketball courts at Yale. I had also seen him around the union office and been told that one of his parents worked for the union. I asked this young man, “hey, one of your parents works for the union, isn’t that right?”

“He LOVES it. He thinks it is the best job anyone could ever do. He feels lucky to do that work every day.” I was truly taken aback at how proud and excited the young man seemed as he reported this to me. Particularly as one of my major fears was that the life of a committed organizer left little time for family or anything else.

“What about you,” I asked, “how did you like being the son of an organizer. I mean, do you feel like your dad spent enough time with you?”

“It’s been great.  It was a little hard when we lived here in New Haven, but when we moved out West, it was a lot better. He never missed a little league game and always made plenty of time with us.”

When the young man mentioned that his father had worked with the union in Los Vegas and Los Angeles–the other cities we in New Haven thought of as part of the “movement” within our union–I said, “Wait a minute, if your Dad worked in New Haven, Las Vegas, and L.A., I must know him. Who is he?”

I recounted this story today in Chicago, where John Wilhelm resigned as UNITE HERE’s International Union President, handing the reigns to D. Taylor, president of the union’s powerful Las Vegas local. I was part of a procession of great leaders toasting the man many of us believe has been the most visionary labor leader in America for at least the last half-century.

It was probably the hundredth time I told the story of a conversation that changed my life forever.  The story was one of many that allowed me, as a new father moving to Arizona, to have faith that my wife and I might help build a new local union here without running ourselves into the ground. During many difficult times, Vinnie Wilhelm’s words offered much needed confidence and peace.

Of course, I am not alone.   The power of John Wilhelm’s words–his humility and ability to make people feel calm and confident in the eye of a storm–are legendary. What struck me today, though, was how thoroughly John transmitted those characteristics to his younger son. I thought about how amazing it was that Vinnie had never once mentioned that his father was the union’s president; he did not mention any of his father’s great achievements. Vinnie was a “legacy” student at Yale where students overflow with a sense of entitlement, and Vinnie–who now makes his living as a writer of creative fiction–showed none of that. He simply conveyed, embodied really, his father’s respect and love for both his own family and the working families he served as leader every day.

Today, on the day of President Wilhelm’s retirement, I thank him once again for all the lessons he has taught me, especially the one through his son Vinnie. And I really hope that when my girls are seniors in college, they will feel the desire and have the opportunity to thank him as well.